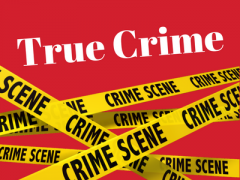 Criminology is such a huge and important topic that an entire genre of true crime has sprung up around it. You can find true crime stories in all formats (books, movies, documentaries, TV shows, websites, live plays, radio programs, games, etc). The topic is horrifying, entertaining, and comical all at once. It can leave you gasping for breath and then have you rolling on the floor laughing.

Many people enjoy a good scare – such as when you watch a scary movie or ride a scary ride. People know that they aren’t actually in danger, but they still get the adrenaline rush. When people read about true crime, it’s as close as they can get to the danger–without actually endangering themselves. At the same time they are usually learning (hopefully) what mistakes not to make should they ever encounter a similar real life situation. It is thrilling and educational at the same time.

The Fulton County Public Library usually does a true crime display around Halloween (a time when many delight in being scared). 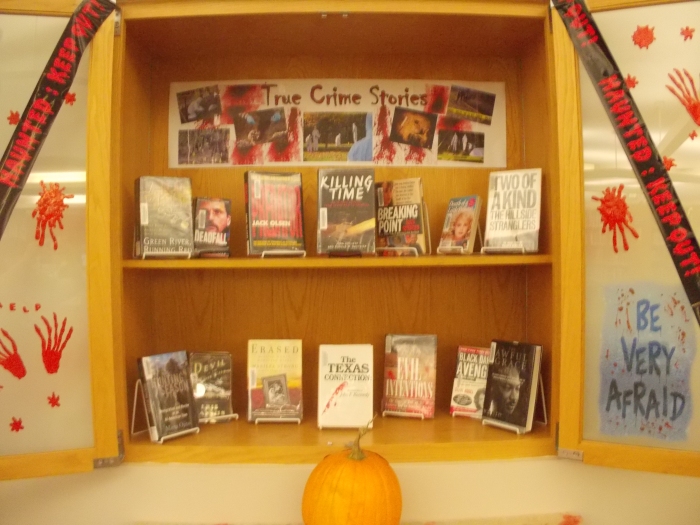 One of the most famous true crime writers is Ann Rule.

Ann Rule was a police woman turned true crime writer and lecturer. She led an interesting life which you can read about on her bio page: Ann Rule Bio.  Rule wrote 36 books and multiple magazine articles. I’ve come across many Ann Rule books in my library read through.

In my opinion, Ann Rule’s most chilling book is The Stranger Beside Me. 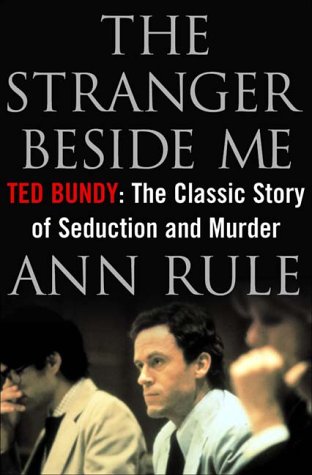 The reason I believe this book is the most haunting of all of the Rule books is because it is personal to Ann Rule. Ted Bundy (yes, the serial killer) and Ann Rule worked together at a Seattle crisis prevention center. Ann considered Ted Bundy a personal friend and spent many hours with him, even entertaining him in her home. Of course, at the time Ann had no idea what Ted was capable of doing. After all, their job at the crisis center was to save lives. Ann and Ted were friends for 18 years. I also find it rather chilling to think that Bundy was a trusted coworker. How well do we know our coworkers? I feel sure that Ann Rule had many occasions in which she thought about how close she (or her daughter) was to being a Bundy victim.

There is also a movie The Stranger Beside Me which is based on the book by the same name. It was a made for TV movie in 2003, so it’s not too scary for most people to watch.

Other books written by Ann Rule are about true crimes that she investigated beyond the newspaper headlines. Ann Rule was always interested in trying to figure out the “whys” behind the criminal act.

While Ann Rule’s books deal with very serious crimes, the next book America’s Dumbest Criminals  by Daniel Butler, Leland Gregory, and Alan Ray deals with the more ridiculous and rather comical stories of crime. 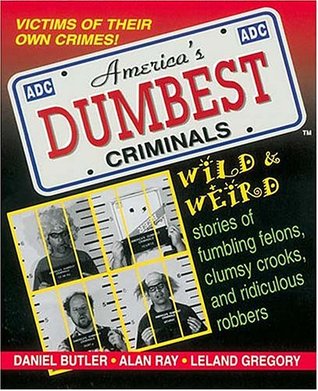 This book contains several very short stories of true but seriously dull witted criminals. This book is a quick, entertaining, and humorous read. There was a TV show by the same name which is now available on YouTube which can be quite hilarious.

Are you a True Crime Reader? Do you prefer the more serious stories or do you enjoy the humorous ones? 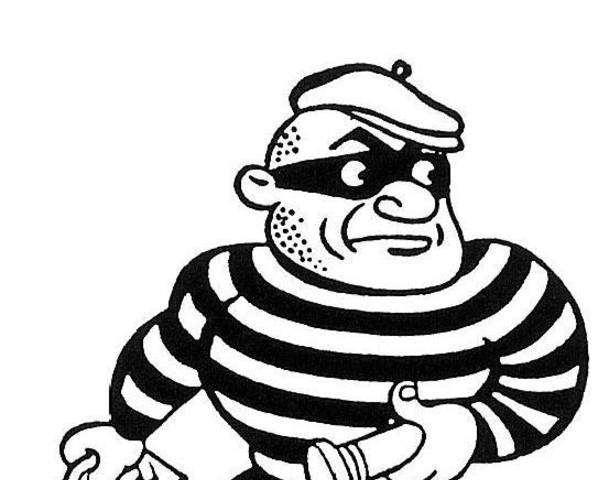 The library read through of the Fulton County Public Library is still ongoing in the 360’s (Social Problems & Social Services).  I have officially reached the 364’s (Criminology). Criminals, unfortunately, are a major social problem. We can learn a lot by studying the criminal mind set and behaviors. Hopefully the knowledge gained through Criminology will help us to predict and prevent bad events from happening. (For more information on how to protect yourself from criminals, read my post about Predators.)

In The Giant Book of Bad Guys: The World’s Worst Crooks, Gangsters, Murderers, Despots, and Desperadoes by Ian Shott the topics of dictators, serial killers, robbers, and gangsters are explored through real life stories. 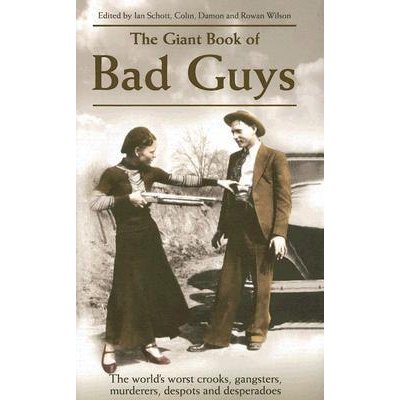 I’m quite interested in the true crime genre. As pointed out in my post Lying, crime sells. It’s a huge money maker in multiple formats. I’ve seen many documentaries, movies,  TV shows, and have read many different types of books and magazine articles about criminals. Bad Guys is the first time I’ve encountered a category called “The High IQ” killer. Of course I have read about the typical very smart sociopaths and psychopaths, but didn’t realize that “High IQ” is an actual category.  I found this to be quite interesting in the book as well as some of the historical information.

The next book about bad guys that I read was Villiains, Scoundrels, and Rogues: Incredible True Tales of Mischief and Mayhem by Paul Martin. This book is exactly what it sounds like. 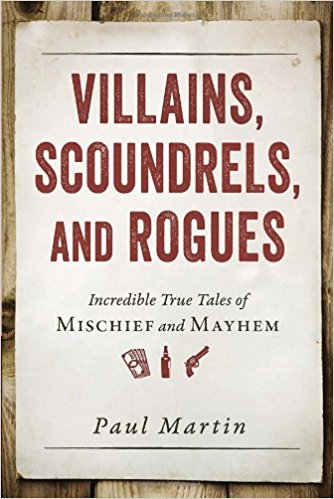 Because I don’t think I could write it any better I have shamelessly copied below the descriptive summary out of the Fulton County Public Library catalog, which in turn was a quote from the publisher.

“Everyone loves a good villain! From the back pages of history, vivid, entertaining portraits of little-known scoundrels whose misdeeds range from the simply inept to the truly horrifying. Even if you’re an avid history buff, you’ve probably never heard of this disreputable cast of characters: A drunken, ne’er-do-well cop who abandoned his post at Ford’s Theatre, giving assassin John Wilkes Booth unchallenged access to President Lincoln; a notorious Kansas quack who made millions by implanting billy goat testicles in gullible male patients; and America’s worst female serial killer ever. These are three of the memorable but little-known rogues profiled in this eye-opening and entertaining book. Dividing his profiles into three categories–villains, scoundrels, and rogues–author and former National Geographic editor Paul Martin serves up concise, colorful biographies of thirty of America’s most outrageous characters. Whether readers choose to be horrified by the story of Ed Gein, Alfred Hitchcock’s hideous inspiration for Psycho, or marvel at the clever duplicity of the con artist who originated the phony bookie operation portrayed in The Sting, there’s something here for everyone. Brimming with audacious, unforgettable characters often overlooked by standard history books, this page-turner is a must for anyone with an interest in the varieties of human misbehavior”– Provided by publisher.

From this book, I learned that Ed Gein was the ultimate “psycho.” His behavior was so disturbing that the details of his killing spree  (which took place in 1952) couldn’t be put together all in one movie. Because of Gein’s crimes, Robert Bloch wrote the book Psycho in 1959 which Alfred Hitchcock later turned into the movie Psycho in 1960. The Norman Bates character was based on Ed Gein. It was because of Ed Gein that Hollywood began to develop the ghastly characters of  many horror movies. It wasn’t until 1974 that another movie, The Texas Chainsaw Massacre, was produced and was also based on Ed Gein’s crime spree. The leather masked killer and cannibal was inspired by Gein. Later in 1991 another movie, The Silence of the Lambs, was in theaters. In The Silence of the Lambs, character Buffalo Bill was a demented transsexual who slaughtered women and used their skins to make various clothing articles for himself so he could dress up in them to turn himself into a woman. This repulsive behavior was based on true details of Ed Gein’s insane behavior. If Ed Gein had not gone on his murderous crime spree in 1952, the movie horror genre might not exist as we know it.

Ed Gein was also somewhat inspirational in the realm of music. You may have heard the children’s song whose lyrics include:

Buffalo Bill won’t you come out tonight and

Dance by the light of the moon

which likely refers, at least in part, to Ed Gein who would dress up in his “woman suit” and go outside and dance in the full moon. (There is also a creepy dance scene in The Silence of the Lambs which is based on Gein’s dancing.)

In movies or books do you ever identify with the bad guys? If you were an actor, would you want to play the good guys or the bad guys?