The first 100 years of the early Boy Scouts (and to a small degree the Girl Scouts) is outlined in Boy Scouts of America Scout Stuff: A Centennial History of Scouting Memrabilia by Robert Birkby. This is an adult picture book with very interesting pictures and facts about the Boy Scouts. Many facts shared in this post come from this book.

Another Englishman, Ernest Thompson Seten,  lived in Canada and had a similar idea to that of Robert Braden-Powell. Seten was an avid outdoorsman who encouraged boys to experience the great outdoors and develop skills for outdoor living. Seten called his organization Woodcraft Indians. Eight years after founding the Woodcraft Indians, Seten was invited to fold his organization into the Boy Scouts and Seten himself became the first Chief Scout. Seten was the primary author of the Boy Scout Handbook. Largely due to Seten’s efforts, the Boy Scouts core values and ethics were formed.

Seven years after the birth of the Boy Scouts in England, an American businessman, William D. Boyce,  was lost in London during a fog. An English Scout noticed the businessman’s plight and guided him to his destination. Boyce was so impressed with the young man and the idea of Scouting that he brought the idea back with him to America and formed the Boy Scouts of America (BSA). It was easy enough for city boys to join the Boy Scouts of America but Boyce was concerned that boys who lived on farms and ranches were not being reached. Boyce founded a separate organization called the Lone Scouts of America (LSA). The literature for LSA was a sort of independent study that Lone Scouts used to guide themselves in order to advance and were sometimes able to meet up with other Lone Scouts for activities.

In addition to reading about the Boy Scouts, I live with an expert on them. That’s right. I married a Boy Scout. The Mister also worked for the Boy Scouts and did fund raising for them. The plaque on the left was awarded to The Mister’s district for his leadership in fund raising.

There is Boy Scout memorabilia all over my house.  The Mister was quite excited when he found out that I would be writing about the Boy Scouts and wanted to show off a few items in his collection. The Mister missed being an Eagle Scout by just three badges. His troop disbanded when he was three badges short. He could have been a Lone Scout to earn the last three badges, but he says his parents didn’t push him to pursue them and he was not motivated enough at that point in time to pursue them himself which is something he regrets. Here are some of his badges and other symbols:

There is also a lot of art work associated with Scouting:

Because I could never possibly get all the items in the Mister’s collection in just one blog post, he requested to do a Boy Scout display at the Fulton County Public Library to show off some more of his collection.

Since the Dewey Hop blog explores library resources and services as well as items available for check out, this is as good of time as any to introduce another resource – our patrons themselves.  Any patron of the Fulton County Public Library can display things in a display case just by getting on the schedule. Below are a couple of displays relating to seashells and things collected during WWII: 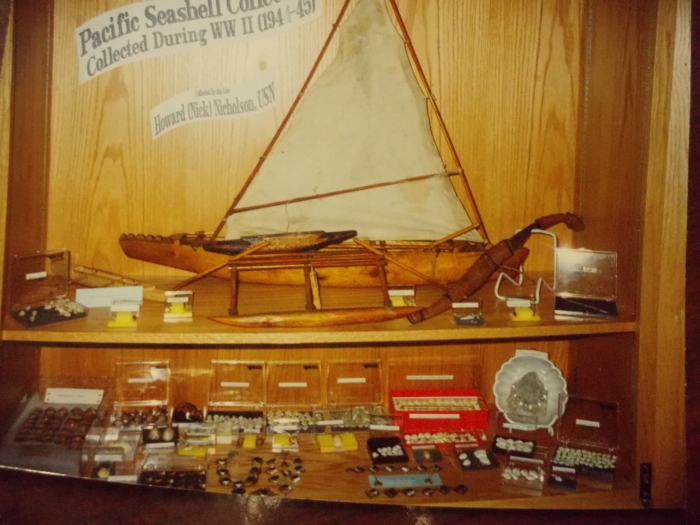 Also currently on display are these display cases to honor veterans which were done cooperatively with the Mister and several staff members: 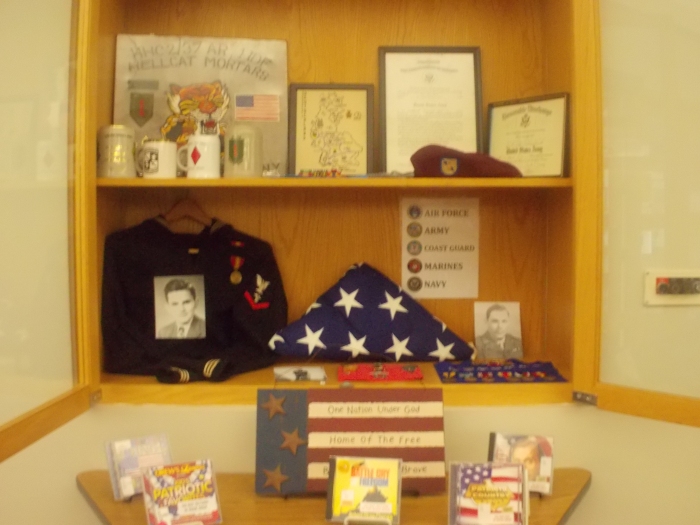 This is a close up shot of a picture of my Dad back in the day and his medals:

Unfortunately I couldn’t find more display photos but Fulton County Public Library patrons have created many displays to showcase personal collections, hobbies, and causes. Some of the displays that I remember were displays of items made from toothpicks, homemade dolls, and model ships.

Here is the Boy Scout display currently on view along with a few close ups: 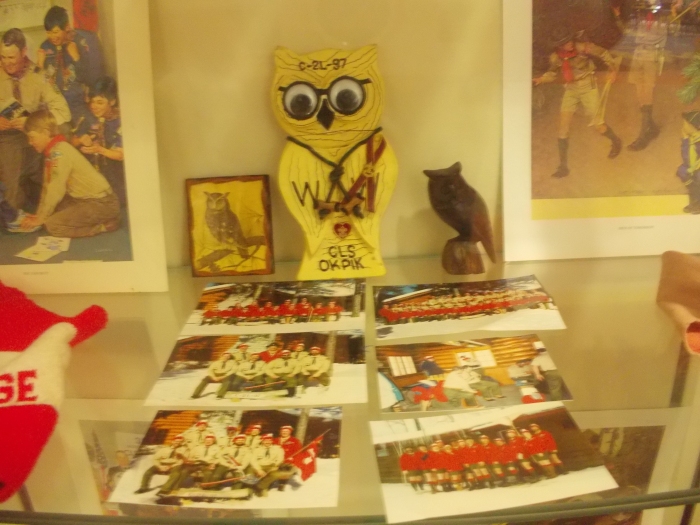 Were you ever a Boy (or Girl) Scout? Do you collect anything you would like to see displayed? Have you ever presented a display?