Americana is a somewhat generic term used to describe all things uniquely associated with the United States. It includes culture, the arts, and history.

On my read through in the 380’s I encountered these two books: 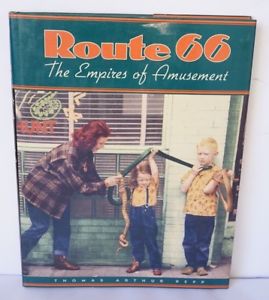 Both of these books are very enjoyable adult picture books. They document the history, culture, and arts of a bygone era along Route 66. Some of the route has been replaced by modern interstates, but much of the road still exists. There are still all sorts of trips that can be booked along this route if you prefer guided tours. Since Fulton County Public Library is located in Indiana, the starting point for our patrons would be Chicago, Illinois. This is the traditional starting point to begin begin the Route 66 journey. Following the route will take you through 8 different states ending at Santa Monica, California.  These books document various attractions along the way. The trip is meant to be a driving adventure and a throw back to days when baby boomers were still kids.

Route 66 was once a major road and is considered to be the most famous route / road not only in the United States but also in the world. Europeans and people from the far east often come to the United States on vacation to experience Route 66. Many people tired of the boringness of interstate travel have begun to reinvestigate Route 66 and have discovered a whole new meaning to the word Americana. The books above (as well as many others) document parts of the road in pictures and descriptions. The books feature restaurants, popular destinations, famous (and not so famous) kitsch, and old gas stations turned museums.

If you are not one to take to driving the open road, but still have an interest in Route 66 there are escorted trips and tours available beginning in California or Illinois. From just a brief perusal of the trips I googled, it appeared to me that the trips are on average about 16 days and range around $3,000.

Also available at  Fulton County Public Library is a DVD called “Route 66: the Ultimate Road Trip. Follow this link to discover content available on this DVD. 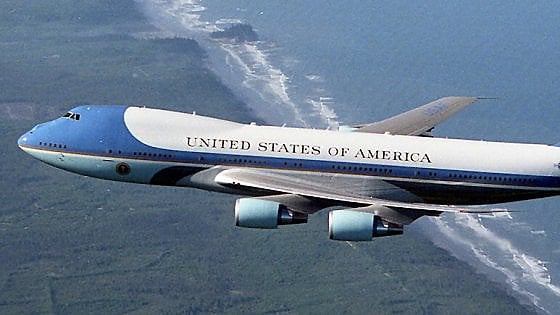 To transport such dignitaries, there must be highly coordinated efforts to get to and from the special aircraft safely and with efficiency. The President and the Vice President need to be ready to fly at a moment’s notice. Air Force One is a military version Boeing 747 aircraft known in military terms as a VC-25.  It is kept at Andrews Air Force Base in Maryland under heavy guard and features four engines and weighs in at 85 tons.

If the President plans to fly and invites the press, the press must arrive one hour prior to the scheduled departure time to allow them time to get through security checks conducted by the Secret Service. Press members and all pieces of their equipment are checked over by the Secret Service and sentry dogs.

Preparations for the President’s arrival begin long before this. Air Force One is prepared in the presidential hangar long before the President even announces his intent to fly to some destination. These preparations include making sure that the plane is in top operating condition as well as immaculate cleaning and stocking of anticipated items such as clean bed sheets, toiletries, entertainment items, and groceries.

While final preparations are made, the Secret Service will announce a “quiet period” if the President plans to speak to the Press before departure. If the President isn’t going to speak, the Secret Service declares a “ramp freeze.” A ramp freeze halts all aircraft movement on the west side on the Andrew’s runway. Many times both a quiet period and a ramp freeze are ordered simultaneously. Special precautions are taken whether the President arrives at the hangar by motorcade or by helicopter (Marine One). Often decoys are used so that an observer wouldn’t be able to tell exactly where the President is. Snipers are posted at strategic locations to help protect the President.

Flight Crew aboard Air Force One consists of an Aircraft Commander (AC) who is the pilot in command, communication operators, and flight attendants.  Flight Crew will be briefed of the critical details of the plane’s mission and destination. These briefings can last anywhere from a few minutes to an hour depending on the situation. Presidential safety and security remains the job of the Secret Service and is handled separately. The Secret Service will inspect the plan for any threats inside and out. The flight crew will board the plane long before the President even arrives which allows final touches to be made and time for the pilot and co-pilot to go through their preflight check list. If the President and his flight companions arrive on time, they will board Air Force One exactly as the preflight list is completed. If the President and his party are delayed, the crew will simply wait and be ready to take off the instant they are on board. If the President will need any special equipment or other items at his destination, a fleet of other planes will have taken off with anything necessary for the President’s arrival well before Air Force One is even in the air. Everything needed for the President will be set up and ready for him upon arrival.

As you can imagine, there is so much to say about a presidential flight and aircraft than I could possibly cover in just one blog post. For this post I relied heavily on information in these books: Air Force One  by Robert F. Dorr

and Air Force One: The Aircraft That Shaped the Modern Presidency by Von Hardesty.

Both of the above books are adult picture books loaded with interesting and technical information which I highly recommend if this is a topic that greatly interests you.

I will mention that some of the pages in Robert Dorr’s book are out of order. The author says in in his dedication and acknowledgements page, “Any errors in this book are the fault of the author.” If one can get the hang of the unusual page order, this is quite an informative book.

In addition to the details I’ve shared, both of the above books deal with the actual aviation and presidential travel  history leading up to the use of a Boeing 747 that we call Air Force One.

Have you ever given any thought to special preparations needed for Air Force One? Were you aware of the use of Presidential helicopters?

Addendum: I know that the picture of Air Force One posted several times without the blog attached to it. I apologize for any inconvenience this may have caused Dewey Hop readers.

Dewey Hop has been off schedule for approximately two months and I also apologize for that. Normally Dewey Hop posts twice a month, so there will be two extra posts of Dewey Hop soon to make up for the month of January. The schedule was interrupted for both professional and personal reasons.

As we all know scheduling anything around the holidays in November and December can be quite challenging. The library also closes if our local schools close due to weather. So being in and out for holidays, training days, inventory, and then out at various times for weather didn’t help the scheduling and work time required to keep up with Dewey Hop. In addition there were some “technical difficulties.”

On a personal note, I myself was actually in and out off and on for several months. My schedule had to be adjusted due to some major upgrades going on in my home. I had to be at my house during these upgrades to make sure my dogs were not a problem to the workers. However, the work has been finished now and I am pleased to report that I now have two newly installed hardwood floors (with one to go), and a majorly upgraded heating system as well as a newly added central air system–the first one my fixer upper house has ever had! This project was massive and involved building runs and adding and deleting vents.

I do apologize for any inconvenience there may have been and I thank those of you who reached out to make sure I was ok. I look forward to many more (and on time!) Dewey Hop posts.