The year was 1983. Ronald Reagan was the President of the United States. Computers were big bulky machines that filled up entire rooms and almost no one knew how to use them. There were a few amateur techno geeks scattered around the country who were beginning to build smaller home computers. A few businesses and schools were just considering using a computer. Most people considered computer geeks to be hobbyists more than anything. The world as we knew it was about to change. Why? Because Ronald Reagan watched a movie.

After watching the movie, WarGames, President Reagan was tormented by the question of “Could this really happen?”

WarGames is a movie about a teenager who thinks he is playing a computer game. Instead he is unknowingly sending war commands to a government computer and nearly starts WW III. Shortly before viewing this movie, President Reagan delivered his famous “Star Wars” speech in which he announced plans to develop laser type weapons (a fantasy weapon at the time) to counter Soviet missiles should the need arise. When the President asked if a real life WarGames scenario could actually happen on the heels of his speech, many of those around him wanted to write him off as a crazy old man. Although those closest to him may have quietly been laughing and thinking he was going off the deep end, he was still the President so his question was actually researched. One week after asking his question, the President received an answer, “Yes, Mr. President. A WarGames scenario is possible and the problem is much worse than you think.” No one was laughing anymore at the President’s question.

The book Dark Territory: the Secret History of Cyber War by Fred Kaplan is a fascinating book that goes on to describe how much worse the computer vulnerability problem was and the many discoveries made in regards to how computers could be used for or against National Security. The United States used computers against the Soviet Union and their allies during the Cold War. The Cold War was also the first known Cyber War. In fact the very idea of what war is had to change. 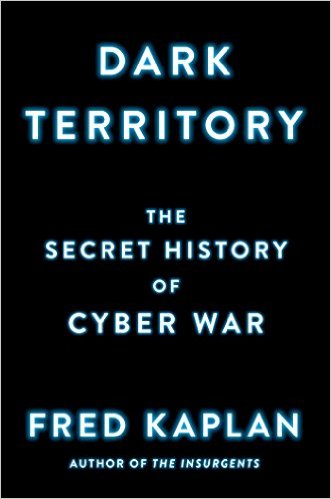 In many ways, Dark Territory, traces the development of the computer age and the awakening of our nation out of naivety. The US was slowly beginning to realize that whatever we could do to other countries, they could also do to us. The tactical field had been leveled. The National Security Agency (NSA) and computer tech people had to learn to work together. The entire way National Security is handled had to change. A literal military of cyber warriors had to be developed. This book gives many specific examples of how all of these changes developed and how cyber attacks and cyber wars have been going on pretty much since the development of computers and the internet. If you’ve ever seen an incident on the news and thought to yourself, “There has to be more going on than what they’re telling us,” you were probably more correct than you realize. Dark Territory explores some of those types of stories.

Behind the scenes cyber warfare is only one type of modern warfare. In many ways newer warfare tactics are less violent, but equally (if not more) effective than wars with bombs and missiles. One form of warfare is financial. In Treasury’s War: The Unleashing of a New Era of Financial Warfare by Juan C. Zarate these newer tactics are explored.

Although the US and many other countries have enforced or been the target of trade restrictions and economic sanctions over the years, the newer type of financial warfare tactics began after 9-11.  They were developed to fight terrorist regimes. It’s just some common sense–cut off the funding to reduce the ability to fund illegal schemes. Some of this is done through diplomacy. Some financial tools have been developed to function “under the radar.” This type of warfare is hidden and intended to cut the financial throat of our enemies.

This book explains how and why this power has worked and what must be done to maintain it in the future. It also raises a wary eye to competitor states like China, or transnational networks, that might use the lessons of the past ten years to wage financial battles against the United States. (p.xiii)

The above is an excellent summary of the book. There are many specific examples in the book about financial warfare. The behind the scenes scenarios are quite interesting.