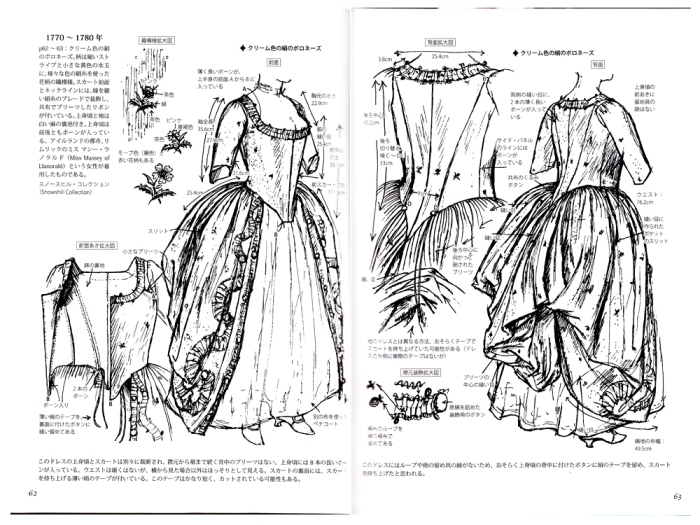 Reading along I have made it to the 390’s,  Customs, etiquette, folklore. Specifically I have been reading books in the 391 category which is categorized as Costume & personal appearance.  The books I’ve encountered thus far are a combination of sketches, written explanations, art, and history. I’ve had a lot of fun examining the sketches, very similar to the sketch above.

Though I can sew, I would never claim to be an expert seamstress. Yet while examining the sketches in the books, I found myself thinking that it wouldn’t be that difficult to make some of these clothes, or costumes. One could almost recreate the design just by following the detailed sketches without a pattern.

In the United States, we tend to describe our clothing with words like “outfits” or possibly “wardrobe.” Many parts of the world use the word “costume” even to describe everyday outfits. For purposes of this particular post, “costume” will refer to every day style of dress as well as fancy dress up clothing.

20,000 Years of Fashion: The History of Costume and Personal Adornment by Francois Boucher is a very interesting and detailed explanation of the changes in fashion over the years. The author explores fashion through many mediums such as sculpture, pottery, hieroglyphics, paintings, and photography. He also distinguishes his use of the words “clothing” and “costume” as follows:

If one admits that clothing has to do with covering one’s body, and costume with the choice of a particular form of garment for a particular use, is it then permissible to deduce that clothing depends primarily on such physical conditions as climate and health, and on textile manufacture , whereas costume reflects social factors such as religious belief, magic, aesthetics, personal status, the wish to be distinguished from or to emulate one’s fellows, and so on? Must we also envisage a process of emergence, which might place clothing before costume or costume before clothing? (sic) p.9

In addition to the male and female clothing depicted in these types of books, they are full of fascinating details of customs and folklore. 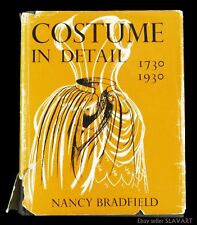 For instance, in the introduction of Costume In Detail 1730 1930 by Nancy Bradfield,  there is a fascinating account of a former custom in England:

Some of the most fascinating garments which have survived in England are those on the wax effigies preserved in the Undercroft of Westminster Abbey.

For hundreds of years it was customary for these life-sized, fully robed figures of wood or wax to be borne through the streets, on the coffin, at the funeral of kings of queens or other great persons. The faces were either a carefully modelled likeness or a death-mask, and they were dressed, in most cases, entirely in the robes and underwear of the person they represented. (p. v)

Though the example I chose to use was actually in the introduction, there are many of these historical facts sprinkled throughout these types of books.

Costume in Detail 1730 1930 also follows changing fashion trends and in the back of this book, it actually follows the social history of both women cyclists and changing cycling apparel in the 1890’s. When women first began to ride bicycles, their long skirts would get caught in the chains, often ruining their clothing and sometimes causing wrecks with injuries. It seems that there was quite a debate about what women should wear at this time in history. Women were campaigning to wear more pant like apparel while cycling. The press began to refer to this as “Bloomerism.” Due to very negative press and wide spread opposition the idea of wearing bloomers was basically abandoned until around 1851. By 1895, fashion had evolved somewhat and female cyclists in America, France, and Germany began to wear tailored costumes of jackets and knickerbockers. This style of dress was referred to as “Rational Dress.”  The Italians weighed in with their disapproval by banning Rational Dress on buses and posted signs basically indicating that women in Rational Dress were considered indecently dressed. Women fought for their right to dress comfortably while cycling. Avid women cyclists continued to wear Rational Dress though they were discriminated against, refused services in restaurants, and generally were on the receiving end of very rude behavior. Some women attempted to compromise by wearing a skirt over their knickerbockers. Little progress was made towards public acceptance however until nearly 1964 when women began to wear the new “trouser suits” with acceptance. Women who wear pants today owe a debt of gratitude to women cyclists.

I also enjoyed Costumes and Styles: The Evolution of Fashion from Early Egypt to the Present with 700 Individual figures in Full Colour by Henry Harald Hansen. 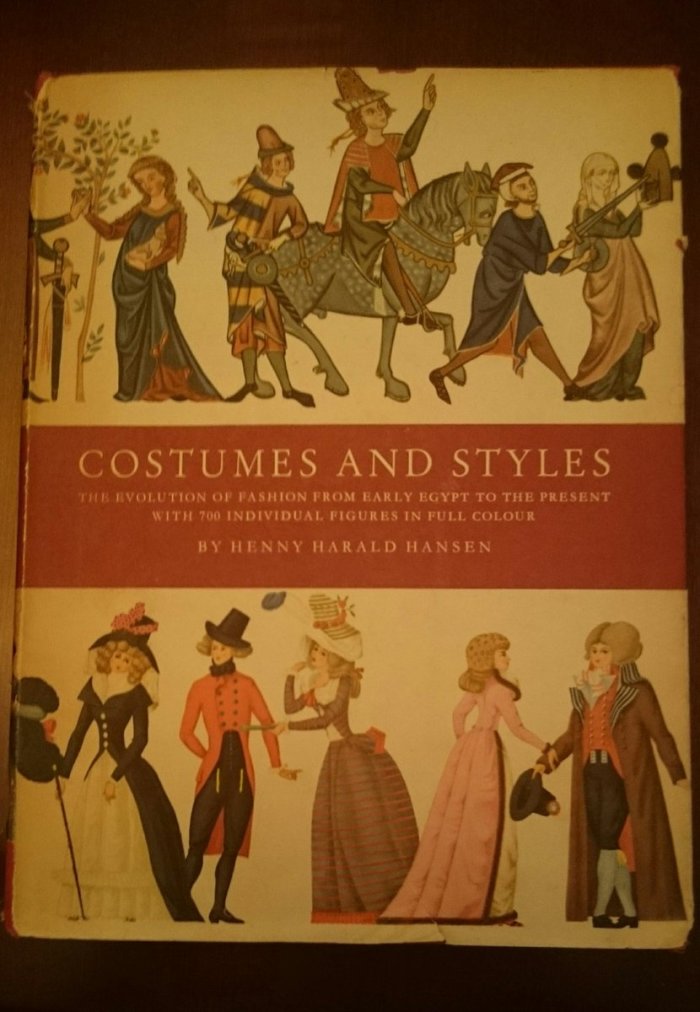 This book is primarily a pictorial time line which traces fashion evolution from early Egypt to the late 1960’s. The book uses full color drawings on the time line which I found delightful. It’s interesting to see how a tweak here and there to costume has evolved into our more modern clothing styles.