Have you ever had a digital device that died? Even if you were responsible and took it to a recycling center, have you ever wondered what the recycling center does with dead digital devices? Sometimes devices such as phones, computers, laptops, tablets, plasma TVs, etc are just no longer wanted because their owners have upgraded. There are the options of selling and gifting your unwanted devices, but eventually those devices will either die or no longer be wanted by their new owners. Sooner or later all of these devices end up in trash heaps awaiting recycling. Most people think that by taking an unwanted or dead device to a recycling center that the recycling center actually recycles it by reworking it and then reselling it. This is true to an extent but what normally happens is the middle men, women, children, and country. 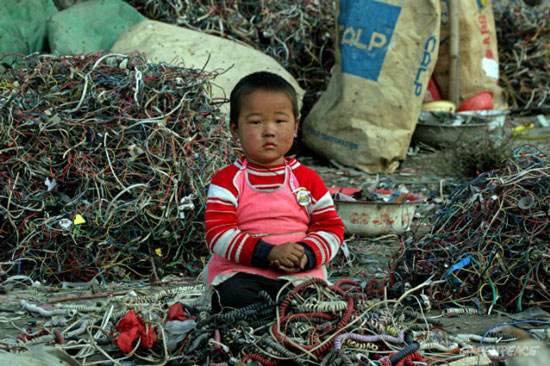 To put it rather simplistically, the recycling centers in the US (as well as other developed countries) collect all of the unwanted or broken high tech devices. Then they are loaded onto ships and exported to third world countries where the devices are disassembled and end up in supposedly temporary trash heaps.

Americans own over 2 billion pieces of high tech equipment and discard 5-7 million tons of electronic equipment each year. Add in the E-waste of other developed countries to all of this and this becomes a huge global issue.

Once this high tech trash reaches it’s destination it is sorted into like piles, disassembled, and then the recycling process begins–almost all  picked apart by hand (another reason all of your personal information should be wiped from any electronic device before it is discarded. Learn more about how to protect yourself by reading my post about Identity Theft).

In the majority of situations no safety equipment or precautions are used. Wires are stripped down by burning off the protective insulation. 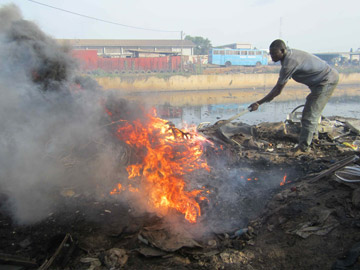 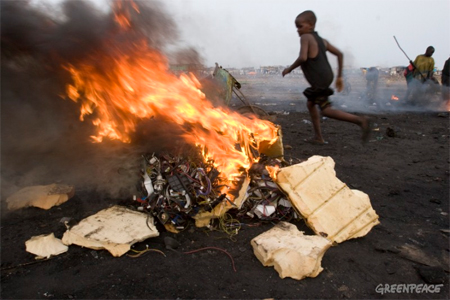 Once the stripping of  electronics and burning processes begin, there are threats to human health and the environment because workers (who do not usually wear gloves or masks) are exposed to toxic chemicals such as lead, mercury, cadmium, and various plastics to mention just a few. Not only is there danger of absorption through the skin, open wounds, cuts, etc but by burning off the wires, some of the toxins are airborne and may affect residents and animals in the area by forcing them to breathe in toxic fumes.

Once the component parts are broken down and items like copper and other metals are harvested then they can be sold to high tech companies who then will use the materials to make more electronic devices and are thus recycled.

Elizabeth Grossman does a great job of describing this issue in depth in her book High Tech Trash: Digital Devices, Hidden Toxics, and Human Health.

It seems that all of our electronic equipment such as computers, cell phones, smart devices, etc is safe for human use as long as these devices remain intact. The toxins, health threats, and environmental threats do not occur until the e-waste recycling process begins.

Another book I checked out was Recycling by Rebecca Stefoff.

This book (as you can see) is usually now cataloged as a children’s book, but when first cataloged in 1993 by the Fulton County Public Library, it was put into the adult nonfiction section. Recycling was really just beginning to be widely practiced during the 90’s so this book was quite topical for it’s time. Because it’s now at least 24 years old, I will only mention it briefly as part of my read through of the Fulton County Public Library.  I believe that the majority of Dewey Hop readers are familiar with the basic concept of recycling.

Do you think the US should in any way regulate the recycling of high tech devices? Were you aware of threats to the environment or human health during the recycling process of electronics?