Moving right along in the 390’s I’ve landed in an interesting section called Customs of life cycle & domestic life. This is a sweet and tender section of the library with much of it pertaining to proposals, wedding vows, and marriage customs. I’ve had a lot of fun reading about how creative people can be with their proposals and vows. (Be sure to check out the link above!)  If you are a romantic at heart, you won’t want to miss The World’s Greatest Proposals by Fred Cuellar.

This book contains real life accounts of the ways in which people became engaged. I really don’t want to give these stories away, so I highly encourage those of you who are interested to read this book.  Each story or “chapter” is only about 2-3 pages long and you will find many creative proposals (as well as traditional ones) within it’s pages.

Once engaged, couples will soon begin to work on their wedding plans. These plans can be as varied as the couples themselves. In the United States we seem to have assimilated customs from many cultures around the world. Couples will want to take a close look at what they do and do not want included in their unique wedding ceremony. To figure out what to include in a wedding, couples might want to examine a little history of weddings as well as some traditions.

In Roman society the purpose of marriage was to form families by having legally conceived children. Those who married and had children were seen as strengthening the honor of the family and escalating the family’s ability to contribute to the state. Marrying, therefore, was a way to show that one was stable and had influence in society. Emperor Augustus set penalties for men who remained single too long.

In the early Anglo-Saxon weddings (primarily in Wales and England) weddings were an informal ceremony with only the families present. The couple made vows of commitment to each other. The vows and following sexual relationship gave legitimacy to the marriage and legalized it. People didn’t conduct vows in a church until the 1500’s and then it wasn’t mandatory to be married in a church.

Formal state involvement in a wedding ceremony didn’t begin until 1653 when the Civil Marriage Act passed by the Puritans under Cromwell. After the passage of this Act, a civil ceremony before a justice of the peace was required. Before this act, however the bride’s father would lead a public ceremony called a “bewedding.” At the bewedding ceremony the groom and his entire family pledged to look after the bride. This pledge was made to the bride’s parents.

By 1753 the Lord Hardwicke’s Marriage Act stated that all weddings had to take place in a Jewish Synagogue, Church of England, or a Quaker meeting to be considered legally legitimate. Many objected to this Act and chose to elope (a tradition that continues).

In ancient China marriages were arranged by the parents of the bride and groom. Parents exchanged their credentials with each other as a sign of their intent to have their children marry each other. Gifts exchanged between the bride’s and groom’s families represented:

The exchanging of gifts between the bride’s and groom’s families would continue for a year or two until their children were old enough to marry. Gifts from the groom’s family to the bride’s family included money, tea, bridal cakes, sweetmeats, and wine.

The bride’s family would take the bridal cakes they received and give them to the groom’s family and friends and the cakes also served as the wedding invitation. The order in which the bridal cakes were given was important since those who were given the cakes first were those family and friends closest to the couple. Anyone who received a bridal cake was also expected to give a wedding gift to the bride’s parents as a token of congratulations.

The traditional Chinese wedding ceremony was one in which the bride and groom were taken to the family alter to pay respects to the heaven and earth, their family ancestors, and the kitchen god. Tea with two lotus seeds or two red dates in it was offered to the groom’s parents.  Lotus seeds and two red dates are symbolic since in Chinese the words lotus and year, seed and child, and date and early are all homophones. It was believed that these items in the tea would help the couple to produce children early in the their marriage and every year as well as grandchildren for the parents. The tea was sweet which was a symbolic wish for sweet relations between the bride and her new family. To complete the ceremony the bride and groom bowed to each other and drank wine from the same goblet. Molded sugar in the shape of a rooster might also be eaten to symbolize trustworthiness – a Chinese astrological belief.  After the ceremony there was  a wedding dinner where the newly married Chinese couple received “lucky money” in red envelopes. In Chinese culture red and gold are colors believed to represent happiness and wealth. Wedding invitations (now), decorations, and gifts are all wrapped in red and firecrackers are set off to scare evil spirits away.

In Africa there are many assorted cultural wedding traditions dating back thousands of years depending on the area of Africa one is from. In some areas it is customary to “kidnap” the bride.” Family must be involved in African weddings for the weddings to be considered legitimate. African brides may wear a veil of braided hair for modesty.  In Kenya the bride and groom are literally bound together with a leather strap during the wedding. Other regions may do the same thing using braided grasses.

During the years of slavery in the US, African-American bride and grooms were not allowed to legally marry. They reached back into traditions from Africa and held their own types of weddings which were recognized by other slaves but not necessarily by the plantation owner. One famous ritual is called “jumping the broom.” This ritual was performed by having the oldest person in the slave community place a broom across the threshold of the couple’s new home and having the couple jump over it and into their home. This practice was used to symbolize a new beginning in the couples lives.

The tradition of jumping the broom is sometimes still used during African-American weddings today. The “broom” can range from twigs, rags, and bound cowrie shells and ribbons, and other beautiful decorations. I have seen pictures of actual brooms decorated in beautiful fashion Many of the “brooms” will be kept as works of art for the couple’s home after the wedding. During the ceremony the broom may be placed either before or behind the altar or a church elder may hold it up. Traditional African clothing is bright and vibrant. African-American grooms may wear a tuxedo including a vest made out of African material. The bride may wear jewelry featuring cowrie shells or her gown or headpiece may be trimmed with cowrie shells to symbolize fertility.

In most American weddings the bride is “given away.’  In the past the bride was considered to belong to her father. Thus the father had to actually give her away to transfer responsibility for her to the groom. During this time period, the groom may also have been given a pair of the bride’s shoes which represented that he was now responsible for meeting her needs and taking care of her.  Traditionally the bride stands to the left of the groom. This is because way back in history brides were often kidnapped. This may have been a real or a symbolic kidnapping depending on the time and culture. The groom held the bride with his left arm, leaving his right arm, or sword arm, available to fight off any other suitors. During the kidnapping if the groom needed assistance he would ask for help from his best friend which led to the tradition of having a best man with the groom during the wedding.

Just about every bride to be hears the phrase, “Something old, something new, something borrowed, something blue.” Each part of this phrase actually has meaning.  Something old is about the bride bringing something from her old life into her new life representing continuity. Something new represents that the bride is accepting her new life with the groom. Something borrowed should be borrowed from someone the bride is close to who has a happy marriage (perhaps her mother) and represents both marital happiness and the idea that all of us are part of a larger family and/or community. Something blue represents love, fidelity, and purity. Superstition says that if the bride brings something blue on her honeymoon she will have good luck and if the bride gives her love a penny before the marriage ceremony they will always have money.

The custom of exchanging wedding rings is from ancient Egypt. The rings are circular and are meant to symbolize a love for eternity with no beginning or end. The fourth finger of the left hand was chosen for the wedding ring because Egyptians and Romans believed that a vein ran from the fourth finger on the left hand straight to the heart. It was also believed that the ring would prevent love from escaping from the heart.

You can read more about the above mentioned wedding practices and traditions in A World of Ways to Say “I Do” by Noah Benshea & Jordan Benshea. 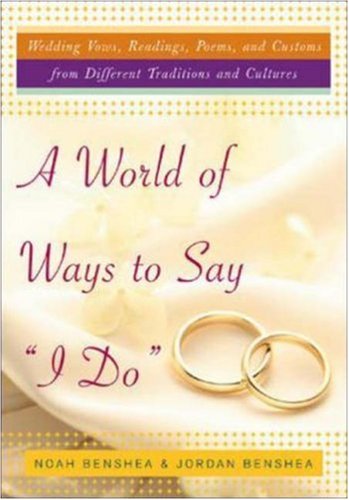 People can be just as creative about their wedding vows. Many people write their own vows. Some people will use more traditional vows in their marriage ceremonies. There are also mix and match traditional/original vows. Whatever your preference the following books will help you and your beloved to create the perfect vows for your own wedding.

In A World of Ways to Say “I Do” by Noah Benshea & Jordan Benshea wedding customs from all over the world are explored as well as how to go about writing your own vows. Although the book is more in depth than I can be in one post it offers the readers simple steps and then talks them through each step to write their vows. The steps are as follows:

Step 1: Decide whether to Write Your Vows Together or Separately

Step 2: Create a List of Meaningful Words and Phrases

Step 4: Decide the Length of Your Vows

The Final Step: Take your vows for a test drive

Many books that discuss different types of wedding vows also include marriage blessings that couples may want to include in their ceremony. Sometimes humor is inserted into either the vows and / or the blessings. Though I won’t be able to cover these types of books in depth, two of this type that I checked out were: 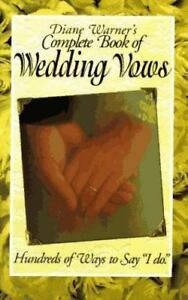 Weddings are often as much fun to recall as they are to plan. What made your wedding different from other weddings? Did you write (or do you want to write) your own wedding vows? Have you ever been at a wedding where special blessings were included?